﻿Draw﻿ing ﻿the Story of the Bible﻿

Then the Lord saw that the wickedness of man was great in the earth,
and that every intent of the thoughts of his heart was only evil continually.
Genesis 6:5

Chapter 6-9 of Genesis gives an account of the great flood during the days of Noah.  The results of the sin of Adam and Eve had been passed down to their children and their children and their children.  People had become mean and harsh with everyone.  Their selfishness caused them to spend all their time thinking of what they could get and not about helping others.  Their selfishness took over their lives and they only thought about evil ways to do things all day long.  Because of their wickedness and their hurting of other people - like Cain did to Able - God brought judgement and punishment to the whole world.


But Noah was chosen by God to build an ark so that he could keep people and animals safe during the great flood that would wipe away everything.  God brought all the animals to the ark and then Noah and his family got into the ark and God sent the animals   inside and shut the door.  Then 40 days of rain came and the fountains of the deep opened up.  The highest mountains were covered with water but Noah's family and all the animals were all safe because of God's provision of the ark.    After a year on the ark the waters settled down into the oceans we know today.  All came out of the ark and gave thanks to God for His care of them.


God put a rainbow in the sky as a sign of His promise that there would never be a flood of water again that would fill the earth.

The Drawing
Another circle after the three standing for the genealogy is how we begin this segment.   In the circle we put some waves.  Then we place three smaller circles or dots following the Flood circle.  This stands for the genealogy - the family line of Noah.

An Activity
The Flood and the punishment for the evil of mankind - talk to the child of a time when you were a child and were disobedient to your parents and what punishment you received.  Ask them to remember and talk about a time when they were disobedient to their parents  and the punishment for that sin.  There are always consequences to actions we do.  If we do right there are good consequences.  If we do wrong there are bad consequences.   Because Noah lived for God, he and his family were saved from the waters of the flood in the ark.  Everyone has sinned, but God has made a way for people to escape the judgement for sin by having Jesus take the judgement for us.


Do not be deceived, God is not mocked; for whatever a man sows, that he will also reap.  For he who sows to his flesh will of the flesh reap corruption, but he who sows to the Spirit will of the Spirit reap everlasting life.   And let us not grow weary while doing good, for in due season we shall reap if we do not lose heart.   Therefore, as we have opportunity, let us do good to all, especially to those who are of the household of faith.
Galatians 6:7-10

An Application - (So what does that mean to me today?)
People were so bad and hurting one another that God judged all of mankind with the flood.  But then he made a promise to Noah, his family and the whole world that he would never again flood the whole world with water.  As a symbol of that promise, God put a rainbow in the sky.  Whenever we see a rainbow in the sky it should remind us of how God protected Noah and his family and promised that the world would never be flooded again with water. 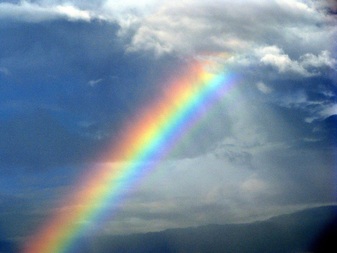 Reading for the Week

Back to Drawing the Story Home Page